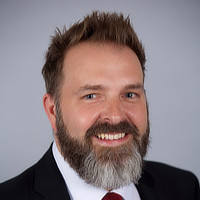 I trained as an accountant, and from the age of 26 I started managing teams; that became a real passion for me. If I'm honest I was never a great accountant, but I had the ability to communicate finance stuff to non-finance people and enjoyed helping people with their professional development.  I had done corporate coach training in the past, but there was a limit to the kind of management I could do. When I spoke to more experienced people in leadership, they talked about a modern way of questioning, empowering and pushing back to the employee. My favourite part of my work day is the one-to-one meetings with my team. How could I get better at that? I spoke to my wife about coach training, and she said, “Why don't you just do it?”. That's when I contacted Isy at Coaching Development.

My coaching journey was shocking, really surprising. When hearing the mentors own experiences on the first day about how transformative the course was, I just crossed my arms and thought, what are these crazy people talking about? I'm just here to learn how to be a coach. While there was a lot of skills and information, it become abundantly clear it was very much about the work you do on yourself. I remember being afraid of being coached because I felt like I had nothing to say. When we dealt with 'gremlins', that's when it started to hit me. My 'be strong' characteristic and the emotional stuntedness I had gained growing up was saying I had nothing to add. By the second module, being coached was as natural as breathing.

I now use my coaching skills in my day job as well as my own coaching practice. It's been fabulous for supporting those one-to-one conversations; before, I was trying to fix everything. My previous instinct was to 'rescue' my employees and it never worked well and left me wondering why. It wasn't until I learnt about the drama triangle in Transactional Analysis and the 'Parent', 'Child' dynamic that we find ourselves in so often, that the penny dropped. It was a powerful realisation – trying to solve other people's problems is not managing! Now I accept that 'I'm ok, you're ok', I don’t need to rescue.

I’ve noticed that there's a profound difference in how people respond to that type of management – it just blows you away. I've had people crying their eyes out and I’ve been able to allow them to have their moment, knowing that it's ok for them to feel that way and ask them what support they need without trying to solve the problem. It's made me a better manager and enabled me to be a better colleague. I've been asked to peer coach and recently our HR team asked me to do a presentation on coaching for the company. It was lovely to be asked and to be recognised for having this additional qualification alongside the accountancy skills I bring to the business.

90% of the conversations at work benefit from you taking the time to listen to what they're bringing. It's very powerful in negotiation too. Listening is in fact the key skill, not trying to win, negotiation is about finding out what the other person really wants. More often than not, there's a much greater congruence of goals than expected.

If someone was thinking of becoming a coach, I would ask them, “why wouldn't you?”. Every aspect of your life will gain something from the skills and self-reflection that you'll do during the PCS training. So why wouldn't you? Professional Coaching Skills is a course I would recommend anyone to do – if more people did this training the world would be a better place.